It is for sure that we all had unforgettable moments from the EHF Euro 2022 which ended on Sunday, so let’s see a compilation of the most cathartic experiences.

The winning goal of Dominik Máthé against Portugal

However, Hungary didn’t qualify for the second round of the Euro, the three matches played in the MVM Dome were still defining experiences for handball lovers. The arena was full at all the three matches, and the second one, against Portugal was won by the co-host. Not to mention that in the last minutes! Máté Lékai, the play-maker of the Hungarian team was giving the instructions during the time-out before the last attack of the team, and at the end of the offensive the future PSG back player scored the decisive goal.

The from thousand wounds bleeding Montenegro defeats Slovenia in Debrecen, than Croatia in Budapest

The Montenegrin national team previously has been titled as the weakest team in Group A, but it refuted quickly the expectations. Despite the fact that due to the coronavirus dominant players dropped out from the team, on the second match day Montenegro beated Northern Macedonia by 28-24, then two days later they overcome also Slovenia which was had a clear chance for the qualification, since at the previous European Championships they finished 4th. Nebojsa Simic defended in sensational form and then he continued the parade with his teammates in the next round. Montenegro beated confidently the last time silver medal winner Croatia, where both Simic and Milos Vujovic were dominant, in addition the latter one who previously played in Hungary, became a member of the event’s All Star team, as well.
The Serbian-Croatian top match in Szeged

The Pick Arena which has been built for the event was full for second time. After the PICK Szeged-THW Kiel opening match of the arena, the organisers could expose the „full-house” board on a national game, as well, sincet he Serbia-Croatia match was extremely popular also among people out of the boarder. In this way, Szeged was able to host the Serbian/Croatian fans, as well, besides the local ones (there were 8300 spectators), and the match was won by Croatia with the lead of the two Ivans, Cupic and Martinovic.
Czech Republic-Sweden 27-27

We consider the match for even more decisive now than we thought before. In the final round of the group matches the Czechs and the Swedes had the same score, but the later European Champion’s goal difference was better. It means that a draw was enough for them for the qualification. Sweden had almost always the lead, but the Czechs equalized the game every time, just like in the end. What is more, Sweden made an offensive mistake in last in action, so the Czechs could go for the victory in the last seconds! Finally, the long start wasn’t successful, they lost the ball, and this resulted in the Swedes advancing.

As they say, the rest is history. Sports history.
The Netherlands strengthens and wins the match with an amateur goalkeeper

In the first round of the second group phase the virus-stricken Netherlands had to stand out without its main 7 players. However, he still managed to write history and win his first points in the second group phase against Montenegro. Among the Dutch heroes, Thijs van Leeuwen, a 34 - year - old goalkeeper was one of the most outstanding, since 24 hours earlier he was still working in his home country. Van Leeuwen who otherwise makes scull implants and plays in the Belgian amateur league, played a key role in achieving victory, since he defeated fantastically, with more than 42%.

The staff informed him a day before the match that in case it is possible he should sit on a plane and take on the role of the goalkeeper of the national team. The role became dreamlike as he was chosen as the best of the match.
Iceland beats the Olympic Champion French team with 8 goals

There were still more than 2 minutes until the end of the match, but the audience of the Budapest arena was already standing applauding the winner of the game, the great-performing Icelander national team.
Since Halgrímson and his teammates beated the Olympic Champion Freches with 8 goals, who with the 29-21 result suffered their worst European Championship defeat. There was no weak point in the Icelandic team, which, of course, signed up to advance to the semi-finals. Well, finally it wasn’t achieved, as on one hand, Island was surprisingly defeated by Croatia who until then couldn’t win any game in the second group phase, then despite the win against the Netherlands and France, on their last group match returning from a big disadvantage they beated also the until then flawless Danes by 30-29.
Sweden changes the game from minus six against Norway

For a long time Norway prevailed the last match of the second group phase in Bratislava, so much that six minutes before the end they had a four-goal advatage. However, a 5-0 series came followed by Valter Chrintz’s penalty 15 seconds before the end with which Sweden took the lead.

The final result is 24-23, which means that Norway could play further only for the 5th place which was achieved in a huge battle after prolonged time against Iceland.
Rodrigo Coralles’ two saves against Poland in the second group phase

For Poland, which had no point in the group until then, had no stakes in their last match where the met the later finalist Spain. Hence they played even more liberally against the Spaniards.

In this way Spain saved their victory and become first in their group.
Andreas Palicka’s three goals in the semi-final

By the end of the half-time Andreas Palicka, the Swedesh goalkeeper was the most successful player of the match in the Euros semi-final against France. The 35-year-old goalkeeper ran a fantastic series whose father emigrated from former the Czechoslovakia to Sweden.

The match was finally won 34-33 by the Swedish national team and they made it to the final.
Niklas Ekberg’s goal medal winning over-time 7-meter penalty

Everyone has already accepted - or just hoped – that the fate of the European Championship title will be decided in the extension, but the Swedes still had an attack, and they could rush forward against Spain for a few seconds.

There was a break-in, after which - probably for inside defense - the German referees sentenced a seven meter penalty. Niklas Ekberg stepped on the line and won a gold medal for Sweden with a 7-meter penalty in the extension. After 20 years Sweden won the title again, all in all for the 5th time. 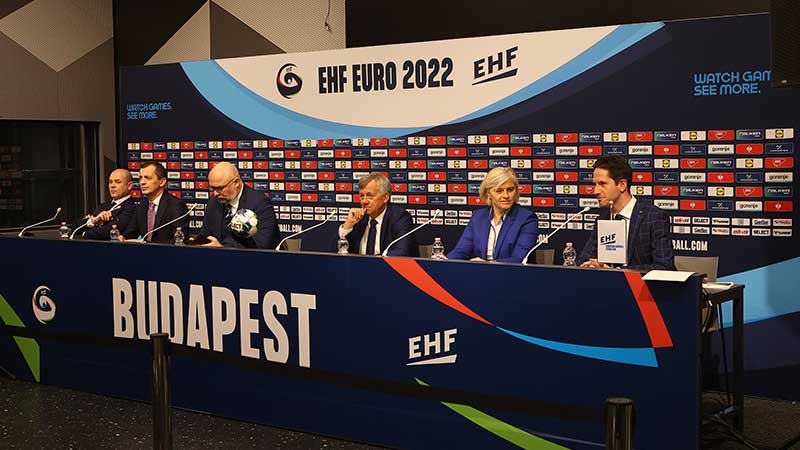 ‘I don’t remember such a close EURO’ – Michael Wiederer