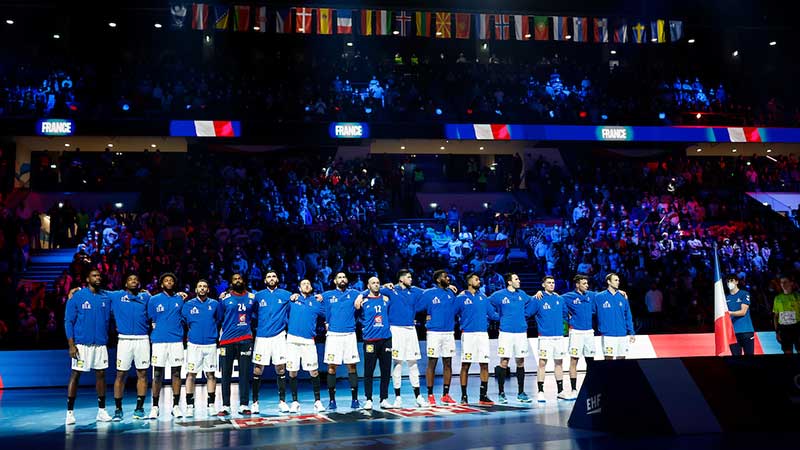 Fights for the main round ended in Debrecen and Szeged at the EHF EURO 2022. There was a huge surprise in the Főnix Aréna, meanwhile the favourites managed to win in Szeged. France and Denmark will bring 2 points each to the main round, which starts on the 20th of January in the Budapest handball arena.

Montenegro-Slovenia 33-32 (16-19)
Montenegro made history in Debrecen

It was not a zero-sum match between Montenegro and Slovenia since the question was which team would advance to the Main Round of EHF EURO 2022. Opening game of Day 3 in Debrecen’s Főnix Arena was a highly explosive one, the teams were playing neck and neck until the very last minute. Slovenians had no choice but to win the match to advance together with Denmark. 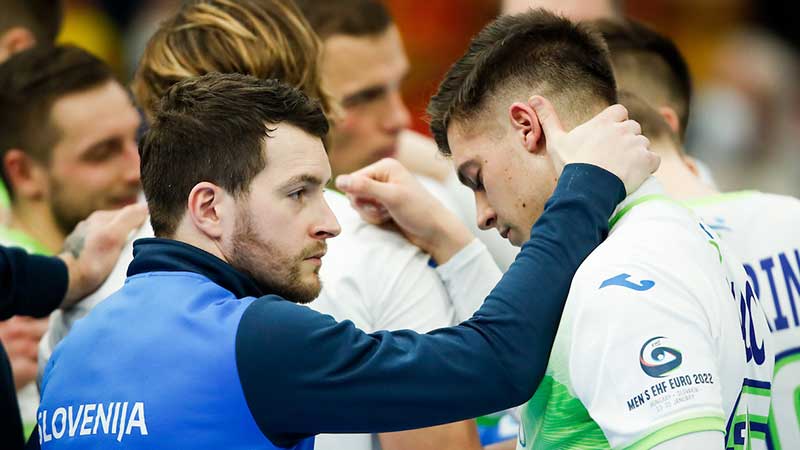 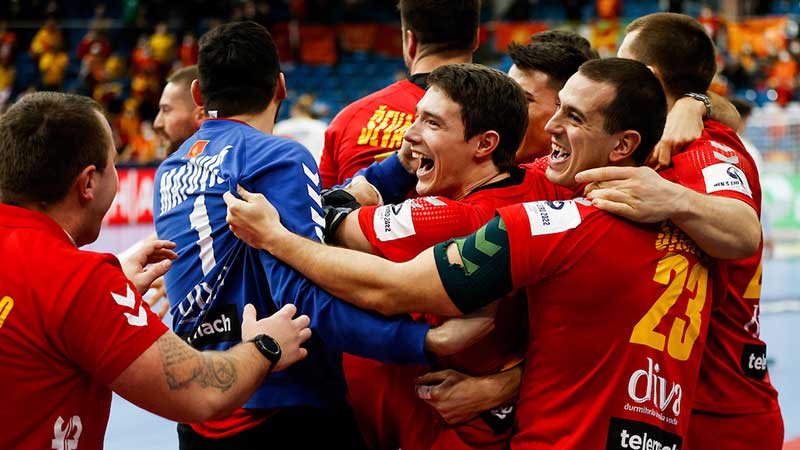 The Montenegrins got their coach back; Zoran Roganovic could join the team on the bench since he tested negative. His first match was not his last one as Montenegro beat Slovenia 33-32, so that the Montenegrins will continue in the Main Round. Two of their players had an outstanding day, both Branko Vujovic (9 goals) and goalkeeper Nebojsa Simic added their extra performance; Simic saved three penalty shots in the second half. Montenegro has made history - the first time ever for them to reach the Main Round of EHF EURO.
Vasilje Kaludjerovic, player of Montenegro:
‘I believed in this, I believed in my friends, we are brothers, we have a very big heart. This is an amazing day in an amazing atmosphere. This is my first EHF EURO, this fact makes the feeling even more special. The difference between them and us was my friend, Nebojsa Simic, he had a lot of big saves. We are ready for the next round. We had many problems during the preparation, a lot of COVID-19 infections, but now everybody is healthy and we’ll continue our story.’

Nebojsa Simic, goalkeeper of Montenegro:
‘I am starting to believe it! We have returned from a terrible situation, and now we can prepare for the Main Round, it’s fantastic. The heart, always the heart makes the difference in a the case like this. I think we are not ready yet for the next game, because of there is a such madness in here, but we will try our best!’

Blaz Blagotinsek, player of Slovenia:
’I do not know what happened with the team. I’m very disappointed, because I thought we would have deserved more. We opened the game very well and were leading for a long time, but in the last 15 minutes I have no idea what was missing. We have to analyze this tournament and then maybe we will find that turning point what led to this defeat. I also had some problems, but probably there have been more mistakes which together contributed to the loss of the match.’

Tilen Kodrin, player of Slovenia: ‘Until the last 15 minutes everything went how we planned previously, but then we missed many shots, we were not focused enough in defense. Our energy level decreased, while Montenegro played with passion. I do not know what happened with the team.’


North Macedonia–Denmark 21-31 (11-15)
Denmark sweeps in Debrecen
Although the last match of Group A between Denmark and North Macedonia was without stake, Főnix Arena’s atmosphere had not fallen at all. North Macedonia beat Nicolaj Jacobsen’s Danes in the EHF EURO 2022 qualification phase and Macedonians had a great start today as well. Despite the fact that it was “Team B” playing from Denmark, the World Champions of 2021 gained a confident victory of 31-21. Denmark won Group A and swept the possible two points to the Main Round of Budapest. Niclas Kirkelokke from Denmark was top scorer with nine goals. Macedonians have to say a sour ‘goodbye’ to EHF EURO 2022 with no victory.

Martin Tomovski, player of North Macedonia:
‘It was difficult to stand up again after the match against Montenegro, but we tried to find the motivation for our last game. We have many young players, and it is a great experience for us to compete here; we have to build up the team and hopefully we will see the result of the hard work we are do these years in the future. We wanted to do something big today to thank all of our fans who came here. We fought for the whole country, because they are crazy about handball. They are everywhere where we go.’
End result of the table:
1. Denmark 6 points
2. Montenegro 4 points
3. Slovenia 2 points
4. North Macedonia 0 point

The Croatian national team started the match sleepy, therefore they were trying to get caught up with the result in the first 10 minutes, while the Ukrainian have not played such a fantastic first half during the tournament so far. Horvat Hvoje also felt the trouble and during a time out he put things together. The coach’s words were useful because the South Slavic team had scored four goals in a row and thanks to the saves of Sunjic they had five goals advantage for the halftime. In the second period the Croatian wheels were turning, although the Ukraine team fought until the final whistle bravely. The enthusiastic Croatian fans could celebrate an easy victory today and the player of the match was Martinovic. 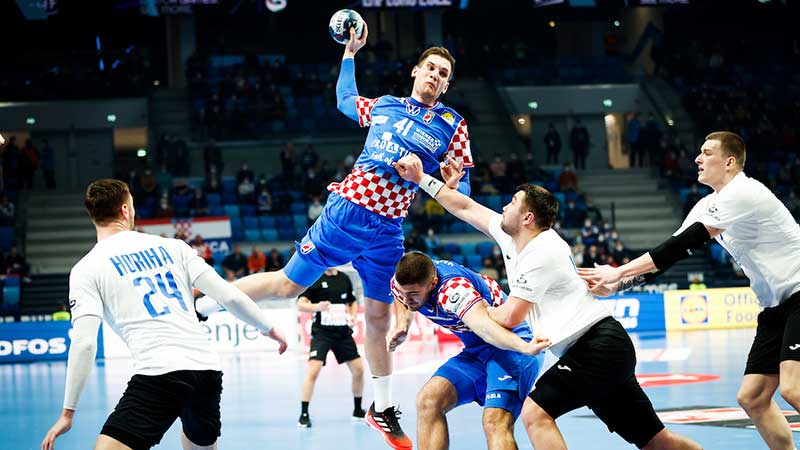 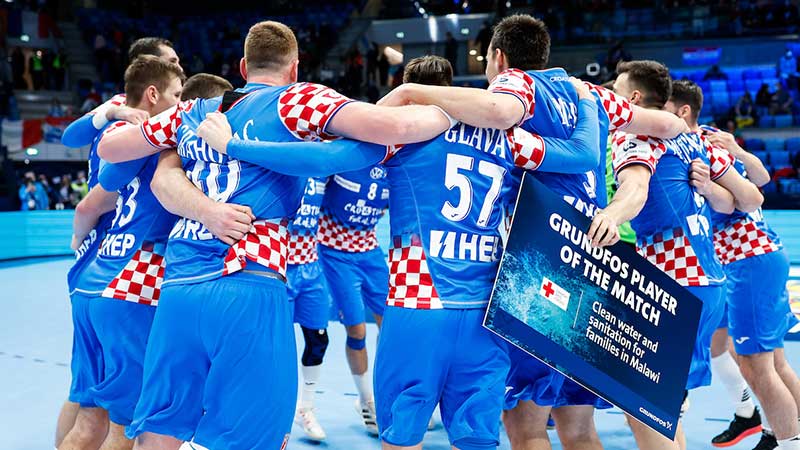 Ivan Martinovic, player of Croatia: ’It is a great feeling that we won the last game of our group. Now we hope that France will beat Serbia and we can go through to the main round. We enjoyed this match, but we had some problems in the first half. Ukraine played great handball, but in the second period we were better. Tight in defense and Mate Sunjic was in top form between the posts. We made some fast and easy goals so it was well deserved. In the future, we should play the full 60 minutes according to the previous plans, because we had a short freeze in every game.’

Luka Cindric, player of Croatia:
‘It was a really hard game for us mentally. We knew that we needed to win to have our chances to go through to the next round. That is why we started nervously. Anyway, I think we deserved to win. We have done our job, we also know that France is the favourite against Serbia, but everything is open. You can never know for sure, we will see. We are only focusing on the following steps, but if we are getting through to the main round, it is going to be tough for us.’


Oleksandr Kasai, player of Ukraine:
‘Unfortunately, it was a very hard game that we lost. I think we can learn from all of our clashes in this EURO. Every game was a great chance to show our strength. Now it is time to go home. Some of us will play in the Champions League in the coming weeks and some of us will rest a bit.’
France-Serbia 29-25 (16-7)
France put the icing on the cake

France started the game with two quick goals, but Cupara kept the Serbian team in the game until 3-3. From then on, however, the Olympic gold medallists shifted gears offensively and defended aggressively. Goalkeeper Gerard made save after save as his team scored seven goals in a row with no answer from the other side. Guillaume Gille's side made it look like men against boys to entertain their ever happy fans. The beginning of the second half saw the French pick up where they left off. They did let up a little midway through the half, but it was only enough for the Serbian side to make the result look better. Croatia were the winners of the day, with the French proving once again that they are a force to be reckoned at the EHF EUROs.

Therefore, France will have two points in the main round.

Nicola Karabatic, player of France:
’Well, today it was a great game for us, we knew that Serbia will fighting for qualification, so they are dangerous, and from the last two games they beat us once, and played a draw. We wanted to take our revenge, and we are going with two points into the Main Group, we had a great defence today, Vincent (Gerard) made a lot of saves, and then we are able to play good tactics in the offense, score some goals. We could score more in the second half, but we made some easy mistakes, lost some balls. We are happy, because it was a though group. But it was only the beginning, the toughest is coming. I am happy that plenty of supporters came and cheer for us, I do not know what is waiting for us at Budapest, but I hope that arena will be full, and everyone could enjoy great handball games.”

Uros Borzas, player of Serbia:
‘Obviously, that is not how we wanted to finish this tournament, but I am glad we could show our character in the last 10 minutes and fought back to a 4-goal difference. It was tough as it felt like the game against Croatia was very tiring, and we could not recover from that. We will keep on working. We have a young team, we hope that we have a bright future ahead.’
Final result of the group:
1. France 6 points
2. Croatia 4 points
3. Serbia 2 points
4. Ukraine 0 point