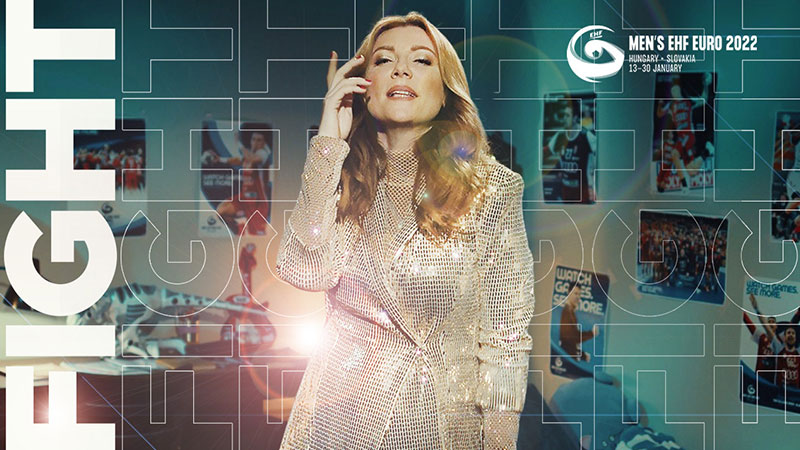 Clip premiere: here’s the official song of the EHF EURO 2022

Fight – that’s the title of the official song of the European Men’s Handball Championship, which will be co-hosted by Hungary and Slovakia in January, sung by Rúzsa Magdolna. The official “anthem” of the tournament is accompanied by a video clip with a unique atmosphere, featuring dozens of extras and professional dancers. The European Championship will start on 13 January 2022 in Budapest, Szeged, Debrecen, Bratislava and Košice.

Magdolna Rúzsa and Krisztián Szakos composed the official song for the European Championship, which will be available from 17 November.

“When we were writing the song, we were constantly thinking about the atmosphere of the big matches, and we tried to capture that feeling. I hope it turned out to be something that a lot of people will be able to sing together”- said Magdolna Rúzsa about the song Fight.

“The song and the video became exactly what we wanted: a captivating, emotional and inspiring combination of Magdi’s voice and style with the atmosphere that is expected to prevail in the stands.” said Barbara Kovács, Managing Director of EHB 2022 Ltd.

The music video was directed by Jimy J. Hollywood, who has worked with many of the country’s biggest artists and was grateful for the invitation. “I found this task through Magdi Rúzsa, which I found very honouring. It's not every day that you get to direct a video clip for an European Championship anthem. I find the song to be of international standard, it has the fire and the dynamics that are worthy of such a sporting event".

In the clip, a dance choreography runs parallel to the story of a young boy who loves handball. The former depicts the sight and struggle on the court and the participating nations of the European Championship, while the latter shows the passion for the sport, the admiration and pride for the handball players.

“Magdi Rúzsa’s energetic and suggestive presence in the clip shows the cohesive and uplifting power of sport, which is the medium that can bring out the most emotions in everyday life. We Hungarians have always been sports fans: when people's hearts beat together at the sight of a goal, there is nothing like it. Music is the only thing that can lift you up emotionally. There's a reason why sports anthems exist," – said Jimmy J. Hollywood, who has also worked on international projects and hopes that the video will inspire everyone to experience the special atmosphere of the European Championship arenas in person.

It is interesting to note that in the last phase of the filming of the October clip, luck was on the side of the participants and creators: a small windstorm blew up in front of the Budapest Multifunctional Sports Hall, much to the delight of the director. This meant that no wind machine was needed, and the final frames were captures in the most authentic surroundings possible: the rising wind waved the flags as well as the ears of Tricky, the official European Championship mascot deer in the clip.

The European Men’s Handball Championship kicks off on 13 January 2022, with the co-host Hungarian national team starting their tournament campaign in Budapest against the Netherlands.