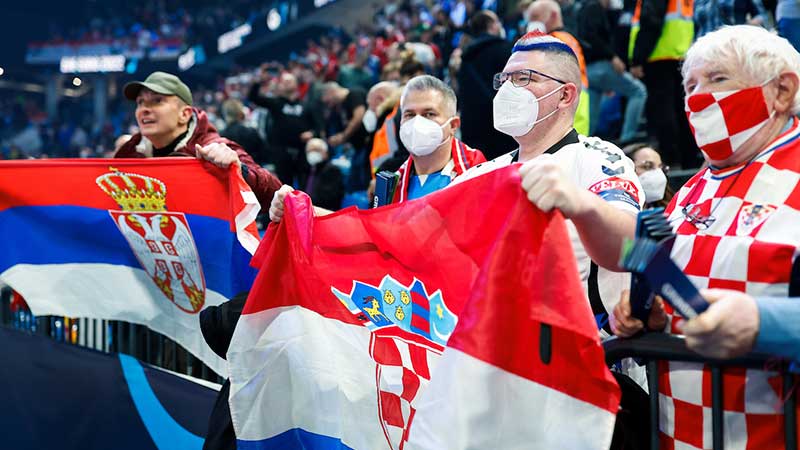 Croatian extasy in Szeged and Danish hammering in Debrecen

It was a frenetic atmosphere at the PICK Arena when Croatia met Serbia, while in Debrecen the supporters were able to see another derby, Denmark ran over Slovenia. Montenegro beat North Macedonia by the fantastic performance of their goalkeeper.

The clash between North Macedonia and Montenegro has been a decisive one between two teams heading for their first EHF EURO 2022 victory. It has been a clash indeed, and spectators who nearly filled Főnix Arena in Debrecen saw a great game. Until the last five minutes, the teams were close to tie. Nebojša Simić, the goalkeeper of the Montenegrins bore the brunt of the match and Montenegro’s victory of 28:24. 28-year-old Simic had awesome saves, which earned him MVP. 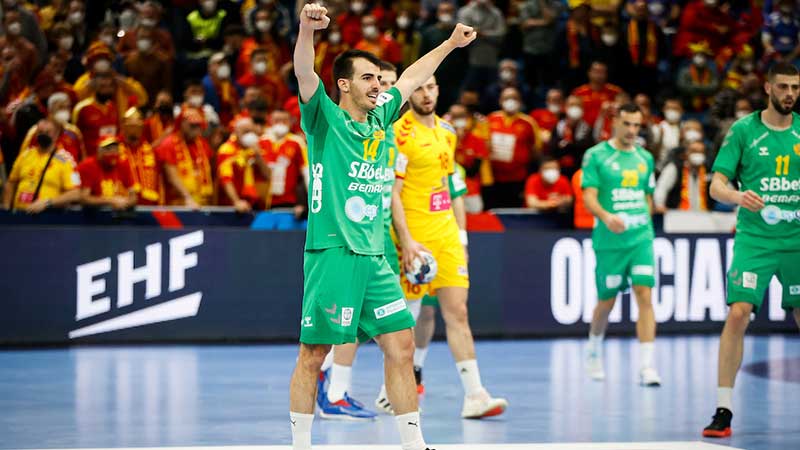 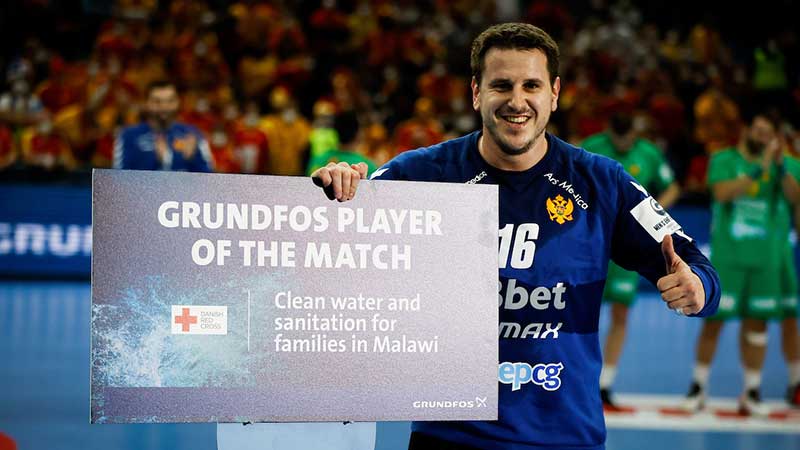 ‘The game was amazing, there were some great moments; such a feeling to save our chance to qualify for the main round. We got from our worst experience to the best experience. I am so grateful to these guys. If we play like this, we deserve to win. Honestly, we needed to get to another level after the first match. I hope the missing players will recover before the next match against Slovenia.’

Attendance at its peak at Group A derby, Denmark beat Slovenia

It is no coincidence that the match between Slovenia and Denmark attracted the most spectators to Főnix Arena in Debrecen (3,812), since this derby had been claimed the most promising one in Group A before. Supporters both from Slovenia and Denmark appeared in high numbers resulting in good vibes and a tied ‘cheering contest’ on the stands. It was a nip and tuck game for long in the first half; by the end of it though, the Danes had taken a step away from their opponents and continued playing top handball in the second half. Danish goalkeeper Niklas Landin had a great period conceding only one goal in eight minutes, moreover he saved several penalty shots. Finally Denmark reached a confident victory defeating Slovenia 34:23.

‘We have already played some matches in Debrecen with the national team and it’s always good to play here, because there are a lot of handball fanatics. It is not so close to Slovenia, but the atmosphere is fantastic. We tried to do our best today, but we had just a small chance to win, obviously Denmark was the better team. We will focus on the next game against Montenegro, we have to hope!’ 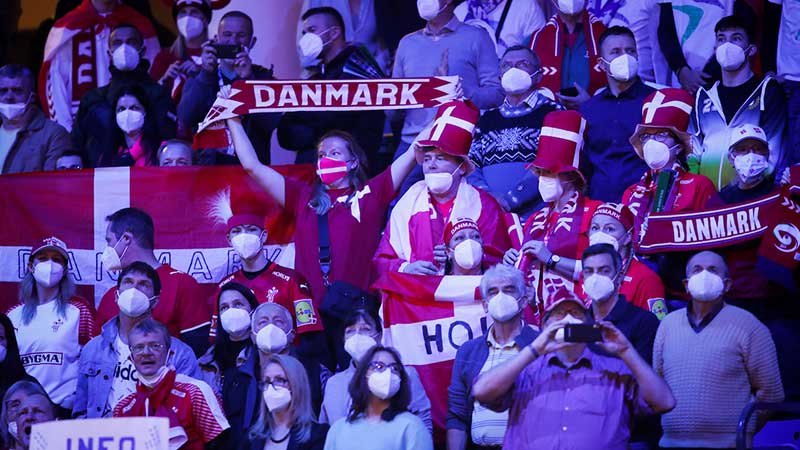 ‘The first half of the game was very balanced between the two teams; at the beginning we had some problems with the defense. Slovenia played well, Mackovsek had a really good day and they were able to stay close to us for a long time. I think our defense improved a lot in the second half and I had some saves and that is why we could finally take the lead and win the match. The Danish fans gave us strength when we needed, it has been very boring to play in empty arenas for a long time. They made the atmosphere incredible for us.’

It was not a big surprise; the French team has changed several positions compared to its starting lineup against the Croats. A 5-6 goals difference was born already in the middle of the first half between the two teams. In the beginning of the second half the Ukrainians lost their best player, Horiha, who scored 7 goals, from there on the match was even easier for the French. We must highlight Pardin Wesley, who saved amazingly as a substitute goalkeeper.

The fans, who were mostly Croatians, supported the yellow-blue team and their loud ovation might have consoled the young Ukrainian team a little. 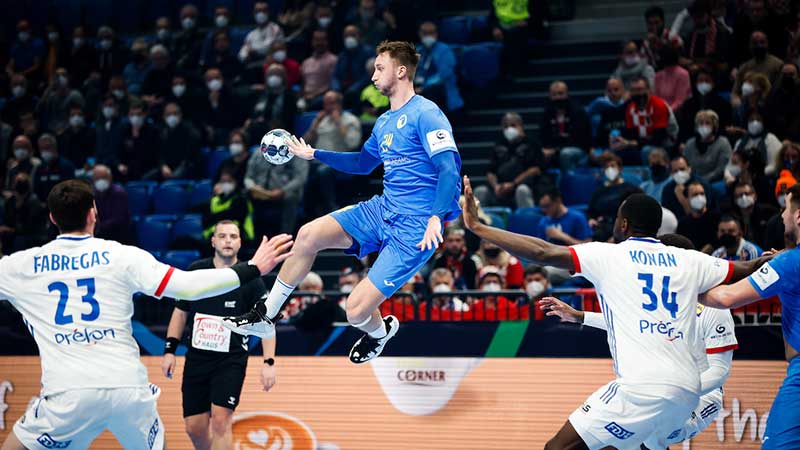 ’It was a fault…I saw the replay on TV; it seemed like a two minutes penalty for sure but not a red card. Today we played in a very good atmosphere. There were a lot of not Ukrainian fans from Serbia and Croatia who also supported us and we are so thankful for them. It was amazing to play in front of so many supporters.’

Dmytro Horiha, left back of Ukraine

Frenetic Atmosphere and victory for Croatia against their great rival, Serbia

Packed stands, 8143 fans and an amazing atmosphere greeted the South Slavic derby. Nothing showed the intensity of the match better than the fact that the Serbians went two man down in the second minute. The Croatians ran over their eastern neighbors in the beginning and took a 3-0 lead thanks to Cupic’s double, but Pick Szeged's right back, Radulojevic who played almost at home, responded with 4 goals.
The teams went head to head until the end of the first half, but the Croatians had the better nerves in the final part of the clash. Croatia started the second 30 minutes more calmly and it was only the Serbian goalkeeper, Cupara who kept his national team in the game. With 15 minutes to go, the Croats built a 4-goal lead and did not let it slip away.

The final result is 23-20 so the final games of the preliminary round will decide which teams go through.

‘It was a very emotional game. The toughest match we have ever played. It was amazing to see so many people from our country: fans, friends, family. We enjoyed it, but unfortunately we lost. We are totally disappointed with the result, but there is no time to be sad. We have to prepare against France. They have a strong team, but we have already shown in the qualifiers that we can beat them.‘

’Serbia was able to come back in one moment but we managed to find a force to finish a good first half with two goals. The half time was good for morale… It always happens with the Croatian fans and players, we can always rely on them and today the arena was packed. We played some good handball in the second period and with the supporters behind us, it was obvious to win this clash.’


The winning recipe? Nations who can play „at home” in Hungary

It was already clear after the draw that one of the most anticipated matches of the EHF Euro would be the clash between Serbia and Croatia. It will take place in Szeged, just a few kilometres away from the Serbian and the Croatian border.

Several nations will feel almost at home with fans coming to the arenas. But which national team’s fans will find it easiest to get to their team's group match? 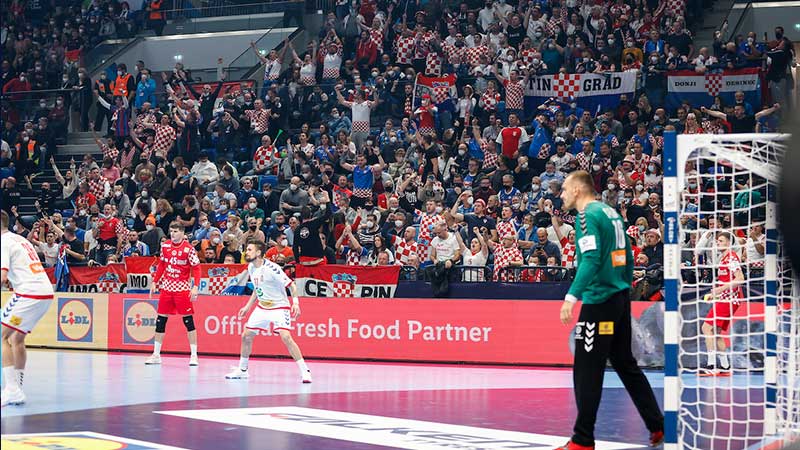 Looking at the distance between the capitals of the participating countries and the Hungarian venues, in theory, those national teams who play in Szeged should enjoy the most support. The fans of two sides of the quartet are almost within arm's reach of the PICK Arena, so it was worth getting in the car.

The Serbs have the easiest job, with Belgrade and Szeged only just over 200 kilometres apart, which takes a fine 3 and a half hours to complete. Croatians can't complain either, as those coming from Zagreb only have to take a 510-kilometre journey. A roughly a 5 hours ride for a 60-minute thrill. (No wonder there was a full house waiting for the two national teams on Saturday.)

The Slovenian and Montenegrin fans arriving in Debrecen are the ones who still have a chance to cover the distance by car. It takes 6.5 hours for the former and 9 hours for the latter supporters to get to the Főnix Arena.
The capitals of Iceland and Portugal are more than 3,000 kilometres from the Budapest Handball Arena, so they need(ed) to check out the flights, just like the Danish and French fans. They all did, for example more than 500 Iceland fans came to Hungary for the opening game, while the French were also well represented in Szeged.