Denmark is through to the semifinals, Croatia helps out France – Men’s EHF European Handball Championship 2022

On the penultimate matchday of the Main Round in the EHF EURO 2022, Croatia surprisingly beat Iceland, which lost its lead on France. Denmark beat the Netherlands decisively, so they will play for a medal in the Budapest handball arena. But don’t forget, the Danish-French derby is still to come on Wednesday!

Croatia cools down the Icelandic geyser

Iceland beat Olympic Champion France on Saturday in memorable fashion, so everybody took their win against Croatia for granted. But Croatia thought differently, even when the Nordic side was up 9-4. The Icelandic fans were louder at this time and they were happy with their 12-10 lead at halftime. 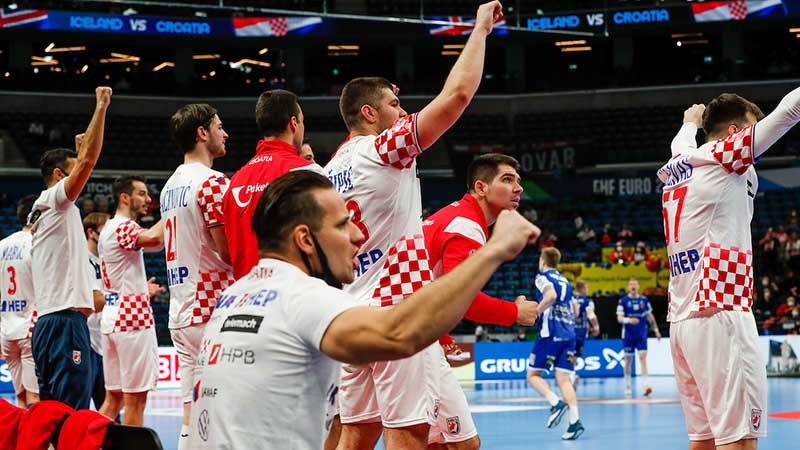 If someone stayed at the buffet, the concession stands or the Telekom Chill Zone for a bit longer (which we can totally understand) and missed the first five minutes of the second half, well, they missed the Croatian comeback. In fact, after 15 minutes, there was 19-14 on the scoreboard in favor of Hrovje Horvat’s squad. This big turnaround refreshed the stands, the neutral fans quickly chose a team to root for, if they didn’t already.

Iceland took the lead again at 22-21, but the Croatian team led by Lucin, who scored 6 goals, and Ivan Pesic, who made a lot of big saves, delivered the win and took all two points as they scored six seconds before the final whistle. 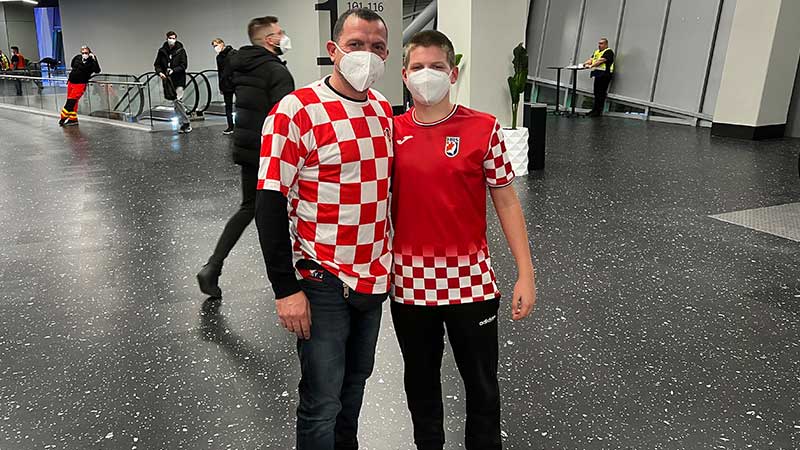 We can say without any partiality that there were no dull games in the whole tournament at the Budapest handball arena, and Monday was no exception.

‘The game was great, we won, so we are very happy. The atmosphere was great, the Croatian fans are awesome and they are always better and better.’ – said Roman, who came to Budapest with his father.
‘We wanted to show our fans how much we carve for the victory.’ – said Ivan Martinovic, the Croatian right back after the game. ‘We started quite poorly, while Iceland built up a five-goal lead. But we believed in ourselves, and we could come back to the game at the end of the first half. The second half was perfect, our defence was aggressive and Ivan Pesic saved a lot of shots. Then we developed a five-goal advantage of our own, but we became a little bit tired in the process, so Iceland could bounce back to level the scores. Moreover they even had the lead again. But we never backed down, we fought until the end.’

‘It is always fun to have Icelandic people to cheer for you when you make a save. It is an extra that helps a lot. Now we just have to concentrate on the match against Montenegro and hope for the best.’ – said Viktor Hallgrímsson, the young goalkeeper of Iceland, who hinted at the last matchday of the Main Group. We are going to have a great Wednesday as well!

Denmark is officially in the running for a medal

But before we turn to Wednesday, there were two more games on Monday, the first one being really important as Denmark had a chance to secure a spot in the semifinals after the Icelandic loss. They made a decisive win with a great solo performance against the Netherlands, which had a tight roster.

Mathias Gidsel scored 9 times from 9 attempts and all of his 140 passes were successful.

With that said, we asked the great Mikkel Hansen about the game:
`The fans are great, we all like to play in front of our spectators, that is why we do this. The semifinal and the final will be tough as always, it does not matter who is the opponent you need to play on the highest level.’

‘I am grateful for the fans. My uncle was among them today as well and it means a lot to me. It is nice to see that our fans cheer for the national team from the beginning of the EHF EURO. Unfortunately, we could not reward them with a victory but against Croatia we will fight again and try to win.’ – said Netherlands’ centre back, Dani Baijens. 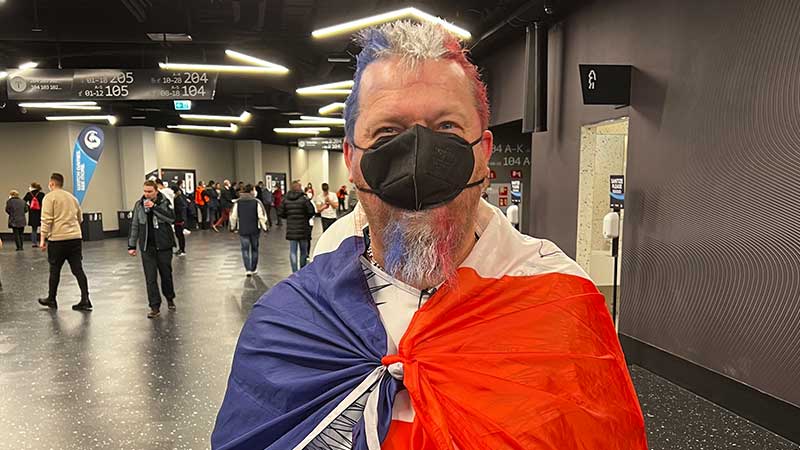 France takes advantage of the gift

At halftime, some fans started to get ready for the night game. One of them was Drasko Brguljan, World- and European Championship runner-up waterpolo player for Montenegro, who has been playing in Hungary for years.

‘I came to see a great game, but I am curious about the other ones. The arena is really nice, it looks beautiful. What chance do we have against France? They are a fantastic team, Olympic champions, but why not? If we give our best, we have a chance.’

“The atmosphere is really really good. It would have been better with the Hungarian team advancing, but nonetheless it is nice. I try to follow the French team everywhere and when I do, I make this hairstyle and beard for fun.” – said Pascal, who was hoping for a victory with a lot of other French fans.
At 20:30 came the Montenegrin-French battle, which as expected threw off with a great atmosphere: there were a lot of Montenegrin fans in the stands and their team started well against the Olympic Champions. They went for the equalizer after Vincent Gerard, the French goalkeeper was sent off with a red card in the 20th minute. They did not score then, the substitute keeper Wesley Pardin made a great save, but they did it a half minute later: 11-11. 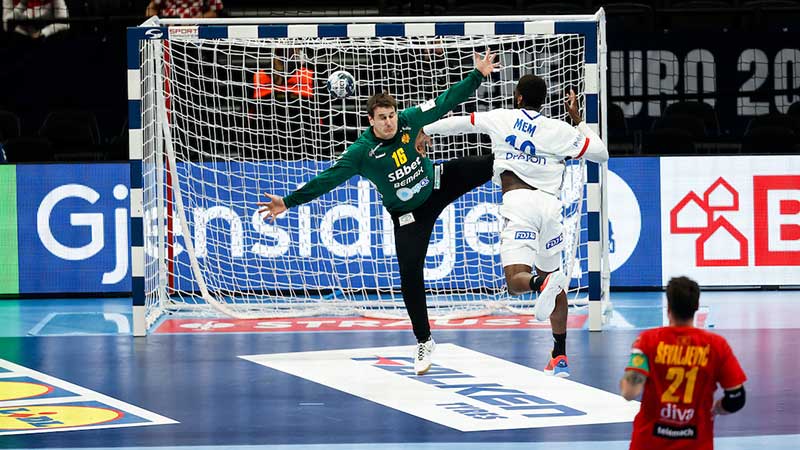 This was all France needed and they went on a 4-0 run, so they could go into the half with a comfortable lead. They were even calmer in the second half, so at 24-17 we started to formulate the words that France is also one step away from the semifinals.

However, this step will have to come against the unbeaten Denmark team on Wednesday.

We cannot wait for the rematch of the Olympic final! 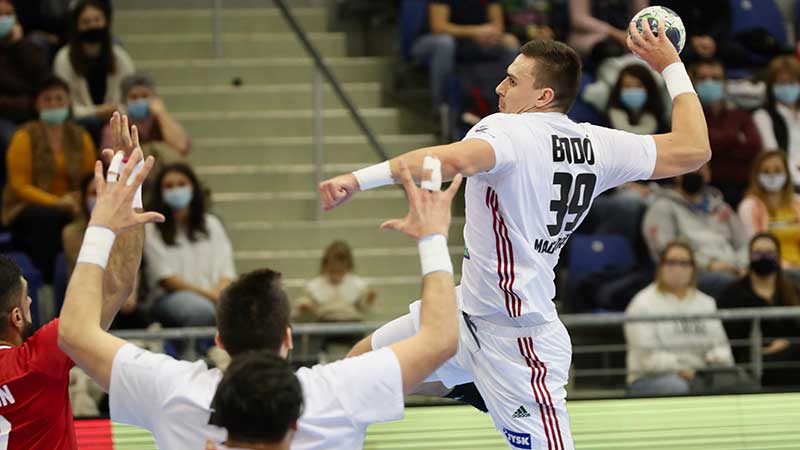