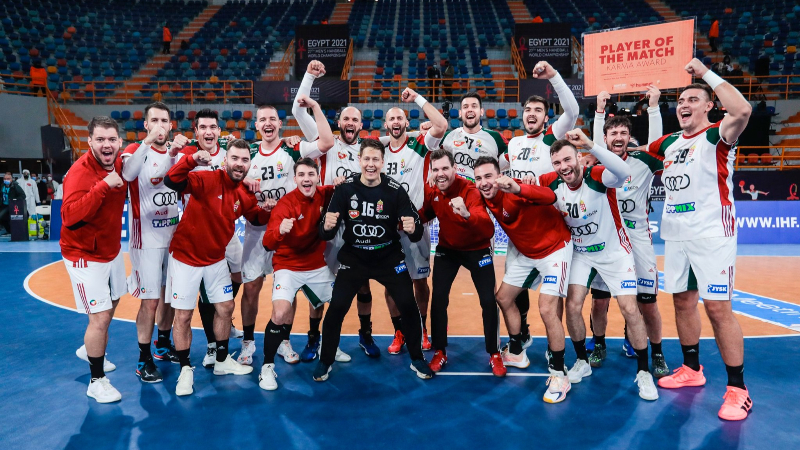 Hungary finished 5th at the World Cup in Egypt

The Hungarian men’s handball team achieved the third best world championship performance of all time at the Egyptian World Cup. In the quarter-finals, the team lost against the French national team during overtime, finishing 5th in the tournament. The young and really enthusiastic team, which is preparing for the EHF EURO 2022 in Hungary, has fulfilled and exceeded the basic goal, reaching the quarterfinals.

The young Hungarian national team set the goal of being among the top eight for the Egyptian World Cup, which in itself would have been an improvement compared to the 10th place two years ago.

During the group stage, Hungary defeated the later retreating Cape Verde 34-27, Uruguay 44-18, then the always strong Germany 29-28 moving on the second stage as the first in the group.

There, first the Hungarian boys beat the Brazilians to 28-23, then Poland to 30-26, and this success meant reaching the quarterfinals. The final match against the Spaniards was essentially stakes-free, with the team finishing second in the group after a 36-28 defeat. On the quarterfinal the 2017 winner, 2019 bronze medalist, Olympic silver medalist French team was waiting for the Hungarians.

Reflecting the odds, the two teams fought a tight match until the very end, the Hungarian national team, which also led 7-1 at the beginning of the match, saved the match to overtime from a 30-27 disadvantage at the end, where the French were a little bit better.

The Hungarian national team thus finished the Egyptian World Championship in 5th place, which is the third all-time performance after the 4th place in 1997, and at the same time an extremely encouraging result before the 2022 European Championships co-hosted in Hungary. “We came here to try to get as much pleasure as possible for our fans and we hope it worked out. Overall, the national team has made one step forward, and this is a good sign for the future, ”said Hungarian head coach István Gulyás after the quarterfinals.

“The team deserves all the praise, we were able to fight for each other and for Hungary. This morale and the ability to fight, the will that is between us, is rare in a team. We now put this in our pockets and carry it with us, ”said Bence Bánhidi, one of the best players in the World Cup.

Máté Lékai, the playmaker of the national team, said after the match against the French: “We exposed our hearts and souls, we did not give up for a single moment. This team is very much together, constantly evolving, it has faces, tactics, but most importantly, it is a real TEAM with capital.”

Don’t miss out, all the detailed information can be found on the ticket page of our website.