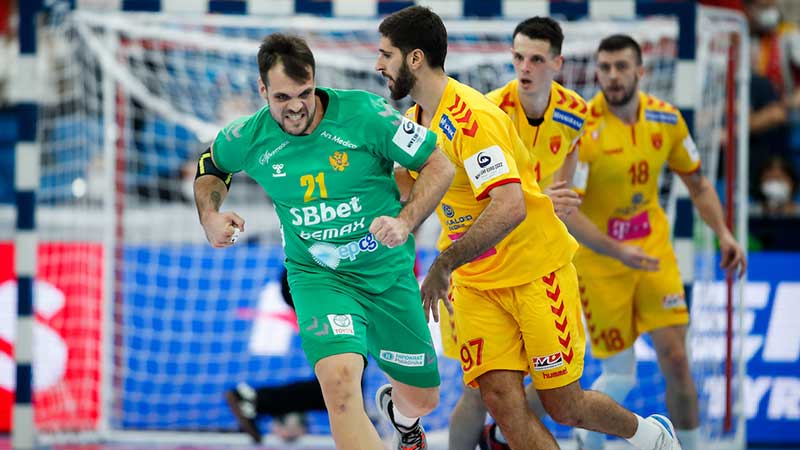 In the wake of the Montenegrin miracle

Everyone is wondering about the ’Montenegrin miracle’ in Debrecen. The ’Lions’ caused one of the biggest upsets of the EHF EURO 2022 on Saturday by beating North Macedonia in Group A (28-24). The team is very close now to make it through to the main round for the first time in their history.

’Everything can change, but determination and desire never’ – one of the most popular daily newspapers in Montenegro, Vijesti writes. The team of the small Balkan country which has a population of 620,000, has fascinated not only their domestic fans but also neutral handball friends. Montenegro had only managed to win one match at the Euros until Saturday evening.

’I am not a hero, it is the whole team’ – said goalkeeper Nebojsa Simic who produced 13 saves against North Macedonia and was voted Grundfos Player of the Match. ’I raise my hat to the guys because everyone has done his job so far. I’ve had problems with my back before the contest, but when I saw my teammates play with so much desire and they were ready to die on the court I had to to the same, I did not have any other options.’

’Phisically it has been a really tough period but we are brave, we are strong and we put everything into the first two matches we could. We are ready for the deciding game on Monday’ – team captain Vasko Sevaljevic added.

The Monenegrins had already had plenty of difficulties before the departure. A couple of key players as well as head coach Zoran Roganovic tested positive with covid, and some other players did the same in Debrecen. Roganovic was back from quarantine and joined the team in Debrecen, but in Hungary he produced a further positive test, so his assistant coach Drasko Mrvaljevic stood at the bench in the first two matches. Furthermore, all the physios of their staff got ill as well…

’This team can improve a lot and become a great one. The guys have been fantastic so far, they have been figthing, they were tactically good and determined as well’ – Mrvaljevic told Pobjeda.

’The great Simic was a magician in the goal, the Lions were the better team against North Macedonia’ – another Montenegrin newspaper, Dan writes on its front-page.

Some comments by Crna Gora fans on local websites show how enthusiastic they have become after the performance of their favourites. ’Bravo masters, this is a sensational victory.’

’Come on guys, make us proud in these difficult times. Long live Montenegro!’

Montenegro will play against Slovenia a do-or-die clash on Monday, Simic and Co. could go through even with a draw to the main round.