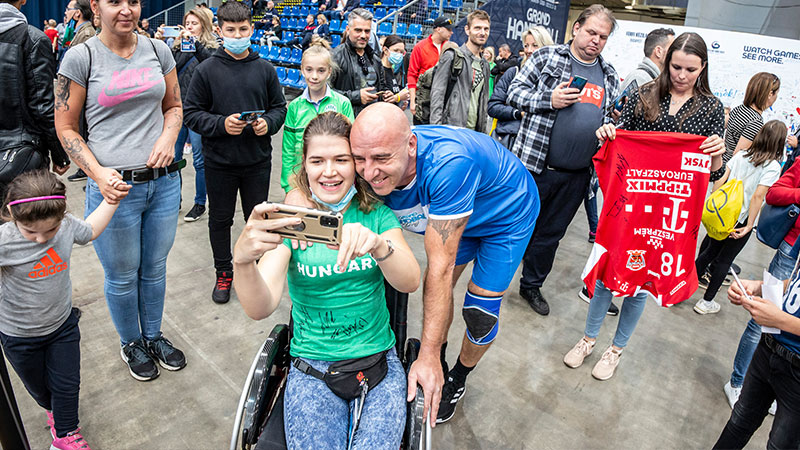 József Éles: „EURO 2022 sends shivers down on my spine”

During the Grand Handball Day we experienced again that handball can really bring people together. This is a good omen before the EHF EURO 2022, for which there is a growing interest. Not only the fans, but also the previous classics of our sport are waiting for the home tournament.

The Grand Handball Day at the BOK Sports Hall was full of legends, and a total of 1,920 „national team caps” participated in the afternoon nostalgia game, featuring former key players of the Hungarian national team.

„Everyone feels good in a match like this, it’s not a question," said the Hungarian legend, who is currently working as the club director of Veszprém Handball Ltd. „Of course I always have a little fear in me, lest something happens to me. After all, I run quite a little and a person’s muscles over 50 are no longer like they were 30 years ago That always holds me back a little from stepping on the court, even though I really want to play. I couldn’t miss this game, it’s very good for our sport to have events like this. And what awaits the team in January… European Championship at home… It sends shivers down on my spine. We couldn’t live to play in front of 10-20,000 people at home, it’s an exceptional opportunity. I expect a medal from the guys and I’m really rooting for them.

What is the biggest strength of this team? The World Cup went well, the team is in a good rhythm, but at the same time the expectation is higher and higher.

We know what the audience is like in Hungary and how much they love handball, this is not a negligible factor, it can help the team. I really like the structure of the national team: there are routine players in it, there are a lot of young people in it who like to play handball and want to show the world how good they are. This can also be a big advantage for the national team, so it is certain that we will achieve a very good result in January.

You stopped playing fifteen years ago. How much has handball changed since then?

My older son often remarks when I give him ideas or tell him what to do and how to do it: “oh, come on, at your age…”. I have mixed feelings, I’ve seen matches where players run as much as a marathon runner. The speed difference is huge, but sometimes you can also pinch a match that is slower because it’s more a tactical game. What’s even more striking is that big players are starting to fade out, with more athletic handball players coming up, running, jumping, dribbling, shooting, and from different positions.

As the manager of Éles Handball School and Veszprém Handball Ltd., you have first- hand experience of how easy or difficult it is to attract young people to handball. Well?

It’s getting harder because of the emergence of e-sports that absorb a lot of kids. In Veszprém too, fewer and fewer children play handball, but at the same time it is a beautiful and colourful sport. You have to put a lot of work on it and that also filters the kids: here you get the beating, you have to run, you sleep very little, you travel a lot, there is a lot. However, if you live through all that, it’s hard to imagine anything better.

What is your message to the members of the national team for the European Championship?

That I want to hang at least one bronze medal around their necks. In fact, I feel that this team could even win a gold medal. I’m really rooting for them, and if they don’t make it, I’ll be there and I’ll join them for 5 minutes…