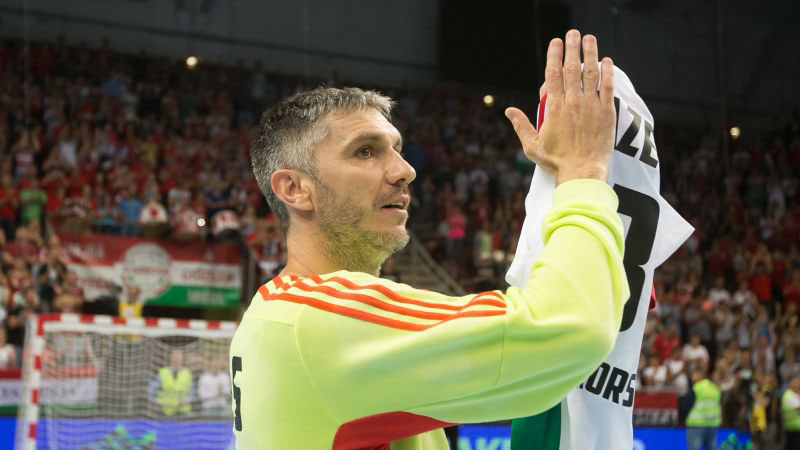 Nándor Fazekas: The domestic environment can give a huge boost

Between 1998 and 2017, Nándor Fazekas appeared in the Hungarian national team 237 times, being one of the most successful goalkeepers of the last two decades. He is a 10-time Hungarian champion with Veszprém, he has also played in Germany and Qatar. He finished twice 6th at the World Championship with the Hungarian national team, 4th at the 2004 Athens and 2012 London Olympics. The 2004 European Championship in Slovenia was his first continental tournament, where he finished 9th with the team, his best result was the 8th place in 2008 in Norway.

He withdrew permanently from the national team in 2017, finished club handball in 2020 in Balatonfüred, at the age of 43. He is currently the assistant coach and goalkeeper coach of Hungarian first leaguge participant Veszprém KKFT, where Gergő, one of his three sons is already playing in this team.

The Hungarian national team finished fifth at the last World Championship in Egypt. What can this mean for a home-run European Championship?

They have outdone themselves, that’s not an issue. Already a year ago, at the European Championship, it was shown that we were on a very good path in rejuvenating and involving young people. The result at that time was also brilliant, as we almost qualified for the Olympic Games. Somehow, though, I was a little surprised by the 5th place, because such a world competition is brutally strong, there are a lot of good teams. A 7th, 8th, 9th place would also be a great result, so even 5th. If we move at such a pace, the Hungarian national team can play semi-finals in a year or two, but let's not run so far forward. It’s important to build further, in addition to young people, those one or two more experienced players will continue to be the routine. A stable Hungarian national team can be built in the long run, this should be the goal.

It is always an eternal question whether to sacrifice even a world competition for rejuvenation.

It’s a difficult question because the result is expected by the fans, the professions, and the team itself, that’s natural. It is always easier for a French or German national team, because there the possibility of immersion is also greater. Now, however, the balance seems to have been established here, and this could have led to a good result, and it could also be a guarantee of continuation.

What kind of guys do you know the players of the national team, who do you keep in touch with?

Basically, I am in a very good relationship with the staff members, Laci Nagy, Pisti Gulyás also goes to the matches a lot, we talk a lot. Among the more routine players, we talk more with Roli Mikler, Bence Bánhidi, Ricsi Bodó, but I played with Matyi Győri in Balatonfüred, for example, and with Ádám Juhász and Bendegúz Bóka we also know each other well. Even if not on a daily basis, but when we meet, we talk to others about handball or privacy. By the way, I see a very good-spirited, cohesive team right now.

For the first time there will be a men’s European handball championship in Hungary. How is the fact itself affected?

I’ve seen a lot of examples, whether in Germany, Denmark or France, of how much plus and boost a home-organized world tournament can give to the home team. All athletes would love to experience this, unfortunately, it wasn’t given to me, but I’m really glad we got the tournament. This is a confirmation for Hungarian handball, which has come to be entrusted with a world event of this level. Great thing, we’ve won this chance for ourselves, and it’s going to be a huge experience for fans, managers, coaches, and of course the players.

The Hungarian national team plays in Budapest, but do you think the arenas in Szeged and Debrecen may be full house?

Of course, everyone will be most curious about the Hungarian national team, but let's not forget that those who love handball are hungry for quality play. In addition, in Debrecen or Szeged, not only locals will be able to watch the tournament, but many people from the area, the region or other parts of the country will also travel there, even professionals and coaches. World-class players will be watched, so it must not be forgotten that the European Championship is an elite field, with teams that basically cover the top of the World Cup as well. It’s a fantastically strong tournament, and handball lovers exactly know that and want to see world-class players.

What kind of group opponents would you like for the Hungarian national team?

It is always a difficult question whether moving forward from an easier group or starting from a more difficult one can lead to better form timing. I think team building is still the most important thing for Hungary, the team is still at the beginning of the road, the important thing is to build, match by match, minute by minute. For players, the match routine is the most important. Sure, it would be good to reach the top four, that’s what I want in my heart, but we shouldn’t put that much burden on this team’s shoulders. The important thing is for the boys to get the most out of themselves so that they can come to the next world competition with even more confidence.
How much of the European Championship experiences have remained in you?

The European Championships were not the best for me, for us, we finished 6th twice at the World Cup, but we couldn't get a better place at the continental tournaments. It’s not as if an eighth or ninth place was a disgrace in an already very strong field.

The game of the Scandinavian teams didn’t fit so much for me, for us. Somehow we always played close, spectacular matches with Serbs, Frenches, Croats, it was a good feeling to take part in them. But my trouble got in with the Scandinavian shots.

How much has the role of goalkeepers in handball changed in the last 10-15-20 years?

It has changed very, very much, whether it’s a team game. The goalkeepers may not miss a second in the concentration, during an attack a wing or a defender may be left without a role, but the goalkeeper may get the shot from anywhere. Speed, quick starts, tricks, changing of the shooting power, all put the goalkeepers in a more difficult task. Even during a video analysis, they have to pay much more attention to everything.

You are currently working as a goalkeeper on the “smaller” Veszprém team. How do you feel in this role?

Thank you, very well. I managed to find my place after the active handball, although I was very afraid of the situation. I was injured in my last year and then the COVID epidemic came, we missed a very long time while I had to stay home. So maybe it was easier to let go of the handball since there wasn’t a match I had to miss. When the trainings started in the new season – already as a coach – I didn’t miss the game as much as if I had stopped overnight. I really like working with young people and seeing in them the dynamism I saw in myself at the time. They want to do everything to be better and better, I am impressed by this attitude, I am happy to work in such an environment.

Gergő, the biggest of your three sons, is also a member of the team, when can he reach to be member of the Hungarian national team?

That’s hard to answer, he turned 18 at the end of October and was already undergoing tremendous development. Already at the age of 17 and a half he was a defining member of the team, far surpassing himself, even in terms of his age, which I can already be very proud of. But you still have to develop a lot, you have to get a lot of routines, in any case you are on the right track to become a Hungarian national team once. It’s hard to predict when this might come because there are a lot of good players with the same goal. I encourage him to never give up, keep working. This is his dream since he was a kid, he said at the age of 10 that he would like to pull on the jersey of the Hungarian national team and play in the CH Final Four in the Cologne arena. Whenever asked, he answers almost exactly the same way.

The question of whether you will be there for the European Championship is, I think, not really a question.

Of course, I hope I can be there in Budapest in every match. Though, the team will train and you can't leave them, so if not in live, I will follow the Hungarian team on TV, as I have been following since I am no longer member of the national team.