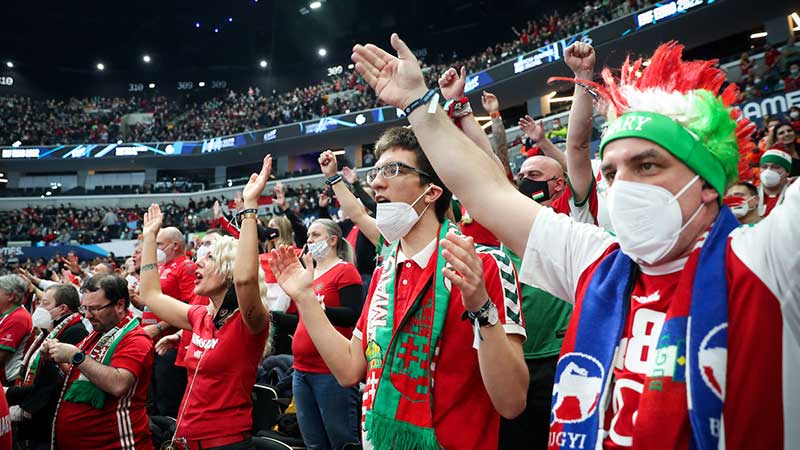 EHF EURO 2022 started off with an excellent atmosphere in the Budapest handball arena. The Netherlands surprisingly beat the host Hungarian team in the opener. In the Pick Arena in Szeged olympic champion France came out victorious against Croatia, while in the Főnix Arena in Debrecen the world champion Dutch team beat Montenegro.

We welcome all – but how easy is it to say welcome, or ‘üdvözöljük’ in Hungarian? 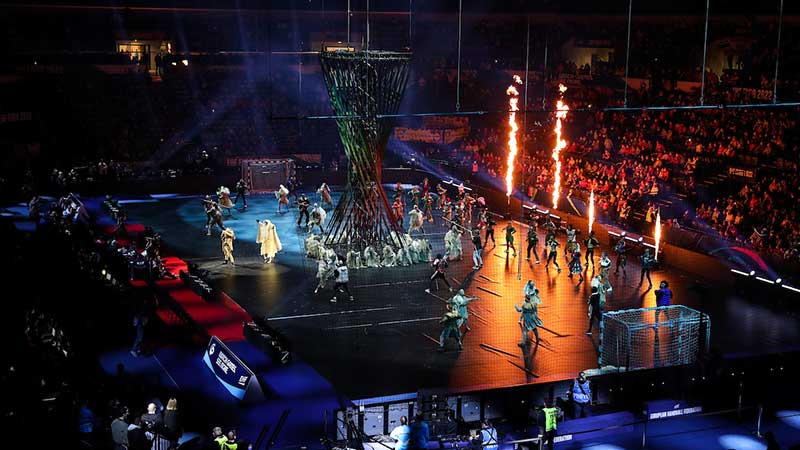 Hungarian is notoriously one of the most difficult languages in the world, but this did not stop the organizers of the Euro 2022 from putting handball players to the test. The European Handball Federation has uploaded a hilarious video on its social media channel testing the language skills of the players from the Dutch, German, Icelandic and Portuguese national teams.

The task was to pronounce the word ‘üdvözöljük’, which translates to welcome in English. Of course some of the players struggled with the peculiarities of the language. Some stars were quick to discover the secret, including two members of the Netherlands national team. Dani Baijens and Bobby Schagen seem to have prepared themselves well for their side’s first group game against hosts Hungary.

You may watch the whole video here.

Three Hungarian cities welcomed Europe’s best, and we saw the first fans arrive in the afternoon as a young boy waved a Hungarian flag at the main entrance around 4:15 pm.

As the minutes and hours passed by, the arena became more of a buzzing beehive as 20.000 fans were on their way to the Hungary-Netherlands game. The concession stands opened one after the other, the activities of the suppliers got the green light and the fans started to warm up for one of their life’s biggest experience.

There was also a buzz in the media centre in the afternoon as the colleagues went through the official publication and got comfortable. At 6 pm – just as the games in Szeged and Debrecen threw off – the host speakers welcomed the first spectators, and Tricky, the official mascot of the EHF EURO 2022 started it’s hunt for fun. 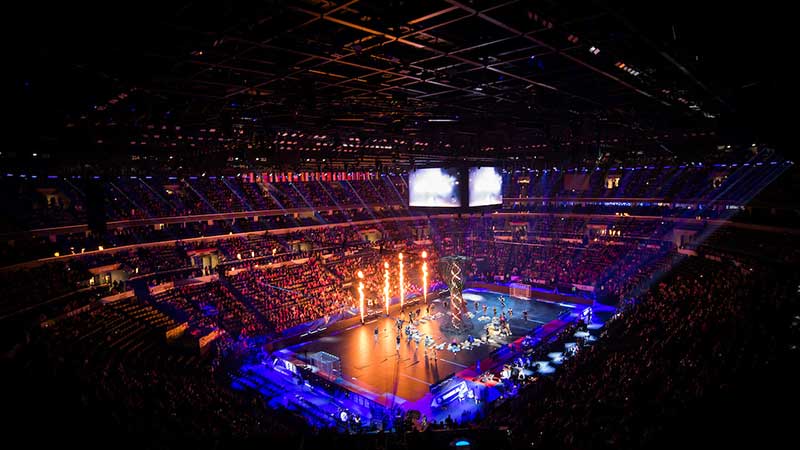 At 6:45 pm, fans heared the official song of the EHF EURO 2022 by Magdolna Rúzsa and they watched the clip of it on the 14 million (!) pixel display. After that at 7:30 pm the opening ceremony took off with a lot of special effects. In the spectacular musical program we witnessed through special visualization of the human senses and abilities how an athlete can achieve their goal and make their dreams come true.

Csaba Vastag performed the official song of the EHF EURO 2022 (now live) and soon after that the arena was loud by the “Go Hungary” chants. But the Dutch fans also started dancing, so the highlight of the day started off with great vibes.

Netherland started the game better (5-2), the Hungarian national team missed a 7 meter throw in the 8th minute, and even later they played a bit nervous than the opponent. Roland Mikler had a huge save when the Dutch team lead by 7-3, and Hungary scored right after that. It was in the end of the first 15 minutes. It could have been a turning point, which was the big question.

Then Márton Székely came from the bench to the Hungarian goal, and the hosting team step by step started to feel the rhythm. They came closer to the Dutch team but Netherland could go for the break with a 13-10 lead. 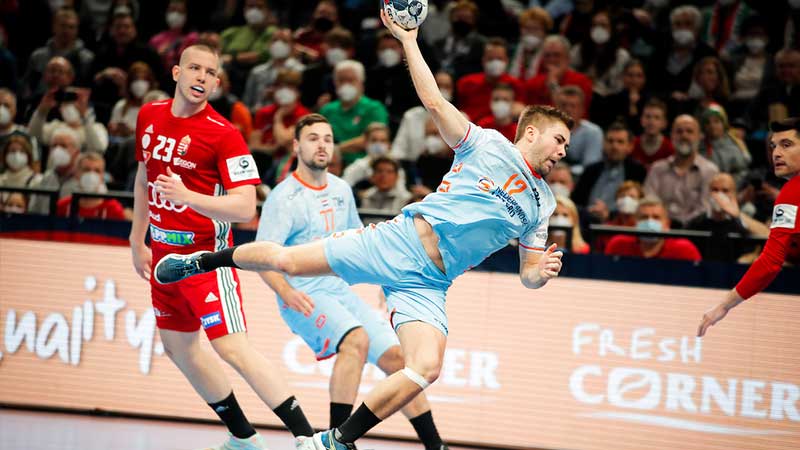 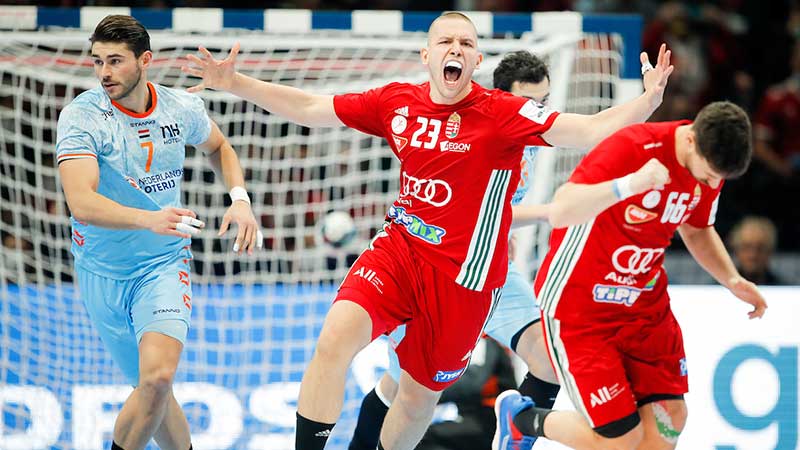 The dynamism of the host team continued in the beginning of the second half. The difference between the two teams was just one goal (14-15) when Bánhidi scored. But by the end of the 10th minute Netherland led again by four goals. Kay Smits remained in his top form. The defense of Hungary started to get better, like the atmosphere of the Arena with its best vibe for the night.

Every time Hungary got so close to the opponent, the Netherlands was always able to step one forward. But the arena just could not stop yelling and screaming that loud.

It was worth to stay until the end. Máté Lékai equalised three minutes before the final whistle. The battle was sharpened. The Netherlands won the battle of nerves, and won the game too by three goals.

On Friday Portugal and Iceland will meet in the group’s second game.

DEBRECEN – Slovenian and Danish victory on opening day The presence of North Macedonian supporters based the vibe of Debrecen’s opening game. The 4th placed team of previous EHF EURO, Slovenia had to handle this handicap.

But there was some problem in the opposite side because the player-coach Kiril Lazarov suffered an injury whilst warming up. So he could just help his team from the bench.

The Arena’s first European Championship goal was scored by Filip Taleski. Then Slovenia took the initiative and the lead. Joze Baznik goalkeeper took a huge role of the Slovenian advantage. But they could not make a bigger lead. So the two teams were fighting head-to-head for the victory. Finally Slovenia won by two goals in the opening game of Főnix Arena.

As it was previously expected, the evening match brought the victory of Denmark against Montenegro. Mikkel Hansen scored 10 goals.

SZEGED – Derby on the first day at the PICK Arena
At Szeged, EHF EURO 2022 started with the match between Serbia and Ukraine

On the last training before the match the Ukrainians did not put emphasis on tactics or the elements of attacks or defense. They cared about losing stress. The blue and yellow crew played some football tennis. However, they could not leave their competitiveness out of the hall so they played like there is no tomorrow as you can see in the video below.

In the evening, the stakes were higher. 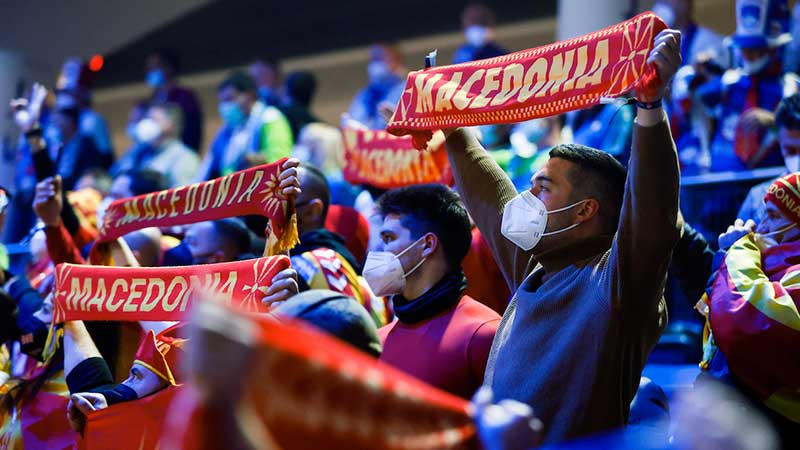 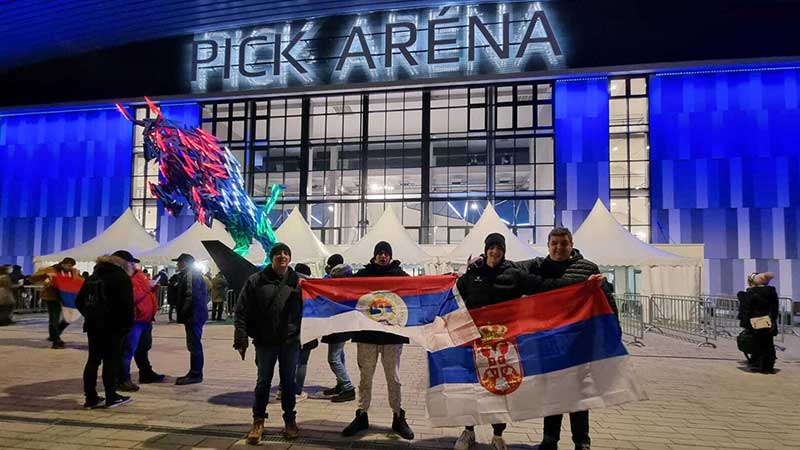 The Pick Arena was loud by the Serbian fans at the beginning of the match. The Ukrainians started with great enthusiasm but Serbia was able to come back and with the leadership of Sotic they built a 6 goal lead by half-time. In the second period Serbia showed their greatness and thanks to their outstanding defense and the performance of goalkeeper Bomastar, they won easily.

We need to highlight the performance of Bogdan Radivojevic, a player of PICK Szeged, who scored five times in front of his ‘home crowd’. On Saturday they continue against Croatia, presumably with full stands.

‘I did not expect so many Pick Szeged and Serbian fans to be here and cheer for me, it was amazing in the new arena. We need to go into every game like we did today. We have our first win, but we have to maintain focus, give more than a hundred percent and do some video analysis for the next two games. If we do that, we will be able to live up to the high expectations we arrived with.‘

On the main match of the day we could see the clash of the Olympic winner France and the silver medalist of the last EURO, Croatia. Fabregas made his 100th appearance in the national team and with the help of Descat and Mem, France was able to win this derby by 27-22. 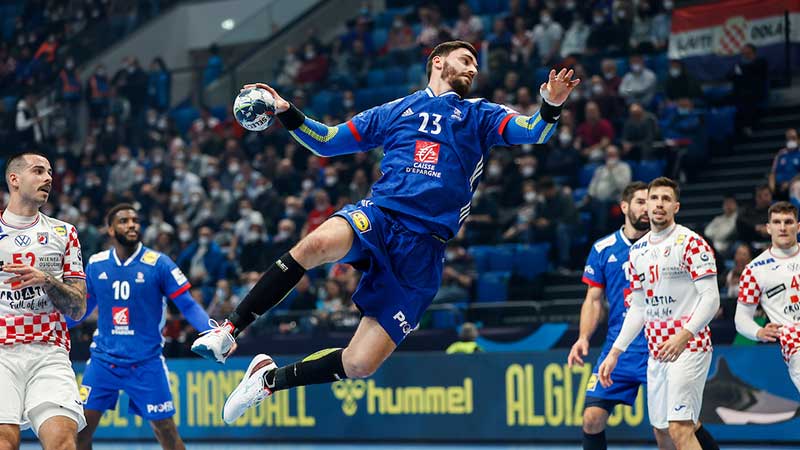