Superheroes of the EHF EURO 2022: The volunteers

Probably everyone agrees that there are so many organizational work behind a great event like the Men's EHF EURO 2022. Hundreds of people try the European championship to be seen as smooth and flawless by the public. Volunteers have a very important rule in order of proper functioning. Only in the Hungarian sites, almost 700 people are or were present. Some of them stand out for their great work capacity, have a huge routine with the Sport-Önként Association, or own a special background. 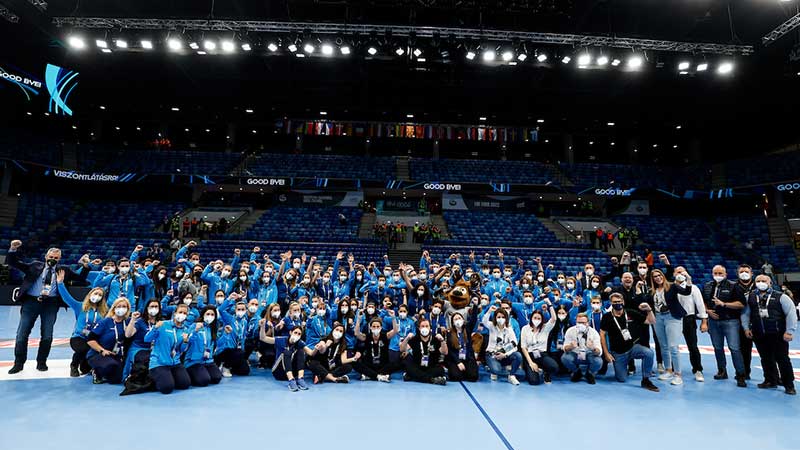 Of the seven hundred, 87 volunteers are not only working at one location during the two and a half weeks, but are also willing to travel for hours to help the EHF EURO 2022 run. Some people of the team have been in the volunteer team of almost every major event organised by Sport-Önként since its establishment (2014), including Women's EHF EURO 2014 and a lot of EHF FINAL4 Women, so they know all the details. Omar, from Egypt strengthens the volunteers’ team in Hungary after having the role of team guide of the Swedish national squad at the 2021 IHF Men's World Championship in his home-soil, in Egypt. Furthermore, there is a 36-year-old Mexican gentleman in the doping control team. 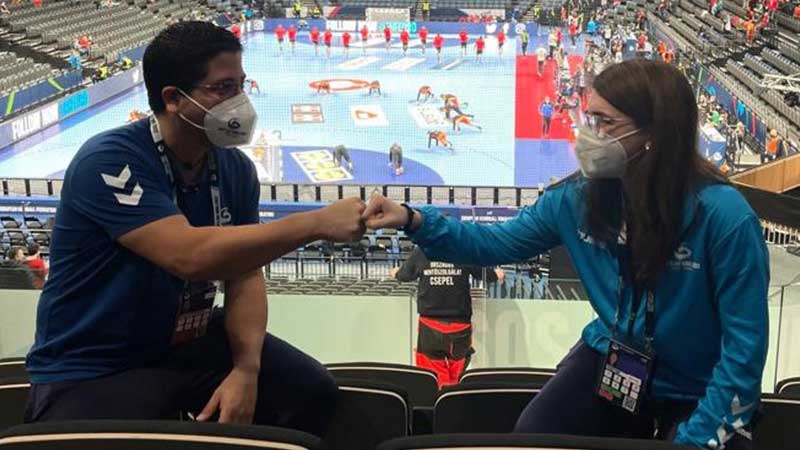 Enrique, who is still an active handballer since 1999 and also a coach at home, professes the principle ‘dare to be different’ and says that handball is his passion as a Mexican. As there is no professional handball there he often goes abroad to develop further and also to compete in tournaments with his own teams. At the current European Championship, he wants to gain as much experience as possible about the internal functioning of such a big handball event and he will share these observations with his compatriots to make this sport more popular in Mexico.
‘It is a huge experience for me to be here. Not only because I can get very close to the players and the coaches, but also as we do not play handball at such a high level back home and there are no large-scale events like this. Until I got here, I was not aware of how intense such a tournament can be and how many tasks are created. It is an incredible opportunity to see the tactics, to see what happens before, during and after the matches and to understand the process of a championship like this. I learn a lot.’

‘The venue is beautiful, enormous and the technical side is state-of-the-art. What I am really surprised about is how volunteers try to get the most of themselves. They are not the responsible ones in charge of running the event, however everyone is trying to do their best to help. Even though there is no control, no constant supervision, no one is relaxing, everyone is helping where they can.’ 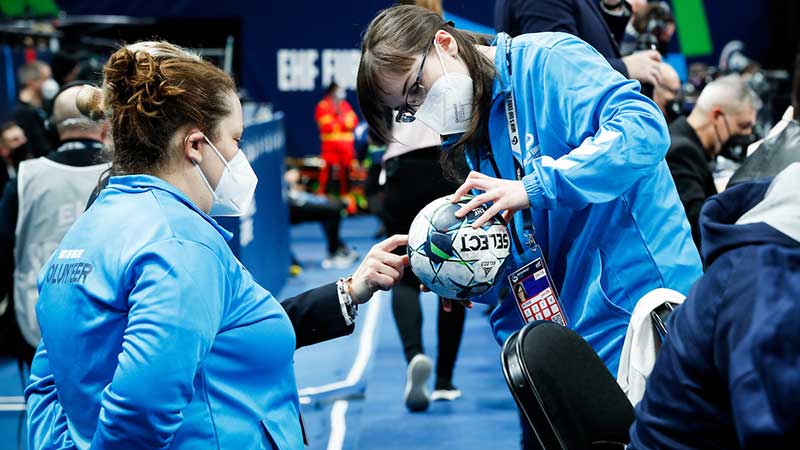 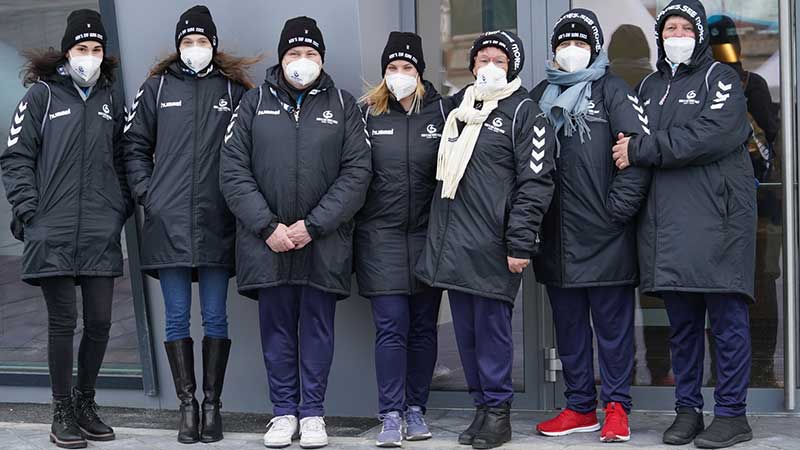 Angela traveled from Austria to the happening as an experienced volunteer

‘I came from Vienna to the European championship. As I am half Serbian I followed two sides closely. I started in Szeged during the first period of the event; it was very important to me to understand every party of the organization. In Szeged I had a role in the team’s hotel at the information desk, then I arrived to Budapest as Jolly Joker which means I can be sent anywhere, with any tasks. The EURO is wonderful, I met many people again who have been in Austria a year before.’
Almost thirty volunteers came from abroad, from countries such as France, Bulgaria, Croatia, Portugal, Austria or even the Philippines.

There are several unique professions among the volunteers: cook, economist, lawyer, chemical engineer, teacher, health professionals or correctional officers can be also found next to pensioners. They all work for the success of the EHF EURO 2022. Naturally, many university students joined from very different faculties. A bigger group címe from the University of Physical Education. One of them is Virág Bablyán, who is an athlete of the school’s cheerleader program. By the way, as they won the domestic championship in December, they prepare for the European championship in the summer. 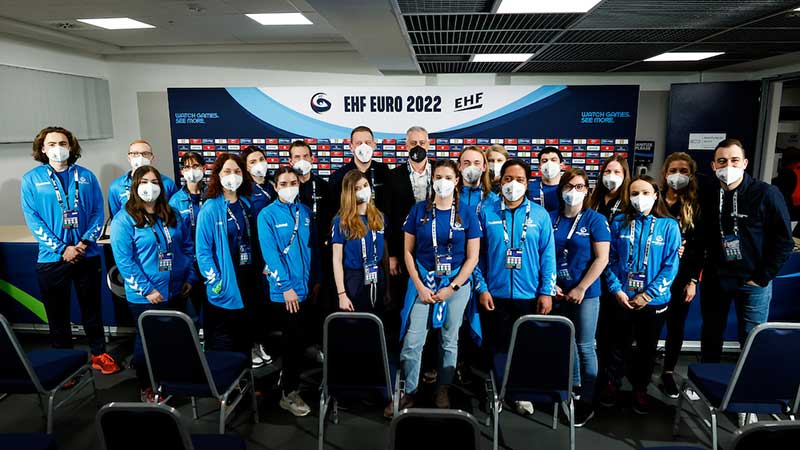 ‘With my teammates, we spend our mandatory internship at the EURO. We thought that this was a great chance to see what goes on under the hood of such a huge event. The job was very exciting and even though the Hungarian national team did not advance from the Preliminary Round, it is an impressive experience. We helped the spectators before, during and after the bouts, we helped them where to go and where the shops can be found. It is really good to see how well organized this event became and the amount of foreigners.’
By the way, there would be no volunteers without a team of 14 coordinators who help them in their well-being, and who have been joined by twelve volunteers for more than a year who have helped them to prepare since then. This job is not unknown to any of the coordinators either, as many of them have been doing this for years, so they were able to gain a lot of experience at sporting events. Since the beginning of November they have been exclusively involved in the organization of the EURO, and for them this is one of their biggest events so far, both in terms of staff and venue, but they are still doing their job with joy and satisfaction.

They always try to encourage every sport lover to join the volunteer team whenever an opportunity arises, because otherwise it is almost impossible to look behind the scenes of such an occasion. In addition, it can help to build relationships that can be used later – and also gives an experience of a lifetime.

The mixed zone through the eyes of a volunteer

It is for sure that the mixed zone is one of the most interesting part of a sport event. It is the place where athletes meet with the media after the match ends and they give short interviews to several journalists. I have to admit that as a passionated volunteer and a sport media ambitionist, the mixed zone is an even more extraordinary venue and it means a huge opportunity to be there. Our task is not too difficult, basically we have to help the organization that everything run smoothly. For example, we are the ones who remind the players and provide them with face masks to keep the place Covid-safety.

The mixed zone starts to be filled with life approximately 20 minutes before the match ends. There is a little hectic and a big preparation from both the organizers’ and the journalists’ side, since everyone tries to do his/her job perfectly.

When finally the match is over, everybody gets even more impatient and looks forward to seeing the athletes coming to the zone. However, for the players it is a whole different situation for sure. After a lost game, they can be furious or in a bad mood and probably they just want to be over all the interviews and go to the chaning room. On the other hand, the happy winners might enjoy their time of shining, smile and try to do their best in front of the camera, as well.

As a volunteer even just standing there, seeing this procedure and admiring the players from a few steps is fascinating. Usually, they do not really seem to care about the people there, but if they look at you by or maybe say something, it is a breathtaking moment. It might sound crazy, but after all they are handball stars, who you do not meet every day on the street. Consequently, I had the luck to see there a few of the biggest names, such as Mikkel Hansen, Nikola Karabatic, Nebojsa Simic or the Dutches’ star Kay Smith.

I am extremely happy that I could experience all this and I wish that one day I will be the one standing there with a microphone and waiting impatiently for the players.