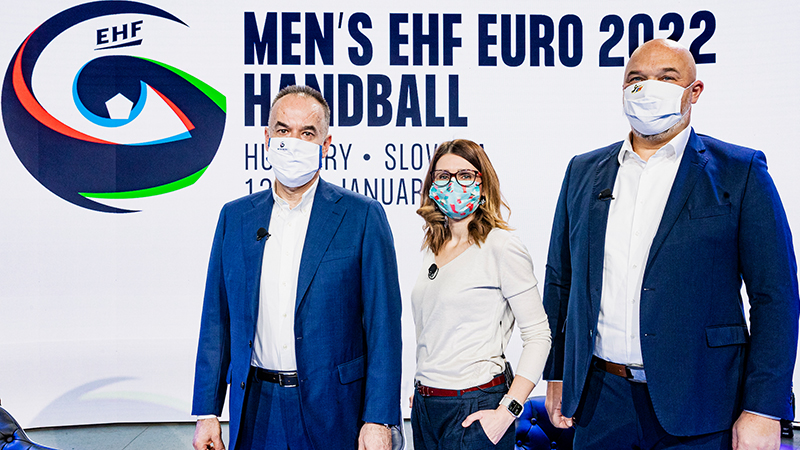 Bratislava (13th January 2021) – The countdown can start. On the day when the 27th Men's World Championships open in Egypt, it is exactly one year until the European Handball Championships in Slovakia and Hungary. The 15th continental championship will begin on the 13th and will last until 30th January 2022. Organisers from both countries are continuing preparations for the handball festival, which will be the second time in history with 24 participants, despite the limitations caused by the corona crisis. They have 365 days left.

Preparation of the championship so far according to the schedule

“From the organisational point of view, the preparations go according to plan. Based on the agreement with the European Handball Federation, together with the Hungarian Handball Association, we have specified exactly what and by when it must be provided. We have no arrears in this regard. The issues around hotels, halls and marketing matters are fine,” said Jaroslav Holeša, President of the Slovak Handball Association (SHA).

Igor Nemeček, the President of the board of directors of the Slovak part of the organising committee is adding: “At the moment, we need to decide in particular where we will play the Euro Cup matches, as the matches from last autumn have been postponed. We are trying to manage the tournament insurance in case of cancellation. Many insurance companies do not rush into this after canceling a number of last year's events, and although it is not easy, we already have an offer and the championship should be insured by the end of January,” Igor Nemeček informed about the most pressing organisational topics these days.

So far, due to the covid situation, Slovakia has not played a single duel of the Euro Cup, which is intended for teams directly qualified for the championship. With the Euro Cup fights, the organisers want to test the venues of the championship even in match conditions. “These days we are arguing where to play the November postponed duels. We will play three matches in March and then at the turn of April and May. We would like to test each of our two playing halls at least once. It is true that in the past we had duels at the Ondrej Nepela Winter Stadium in Bratislava and in the Steel Arena in Košice. We know the logistics but our aim is to test during the Euro Cup how it will look according to the European championships setting,” said the SHA President.

Two home matches of the Euro Cup should take place on March 10 and 12 in Slovakia and subsequently March 14 in Hungary.

Despite the challenging situation around the world, the organisers of the European Championships want to give fans a positive message that a major global event is coming to us in a year's time.

“The coronavirus pandemic is complicating the preparation of not only our national team. So far, it is more damaging to the sporting than the organisational side of the European Championships. Although the recent Women's European Championships, which took place only in Denmark after Norway's resignation as a co-organizer, significantly affected the organisers from a financial point of view, we don't know the exact numbers yet. It is not easy to plan something, although we still have a year, but we do not know how the situation will develop,” admitted the head of SHA, according to who they do not count on an alternative solution, but the original plan.
“We have a bit of an advantage that the European Handball Championships will be in a year and will be preceded by other important sporting events - the World Ice Hockey Championships, the European Championships in football and the Olympic Games, which will help us to orient ourselves in planning. We also believe that the vaccination can change the whole atmosphere of society and in January, we will be able to organise a spectacular event in front of full stands,” says Jaroslav Holeša.

Qualification will culminate in early May, the European Championships draw in Budapest

The European Qualification is in full swing, the 32 participants of the II. phase fight in eight groups of four for 20 spots. However, due to the pandemic, some teams have not been able to get involved yet. All advancers will be known by 2 May 2021 after the matches of the final 6th round in the individual groups. The draw of the basic groups of the European Championships 2022 will be in Budapest after the end of the qualification. The exact date will be determined by the EHF and the organisers will inform about it in time. Germany already has 8 points in the 2nd qualifying group and is the first advancing team to the European Championships. This is good news especially for the Slovak organisers, as Germany was chosen as a cooperative team in one of the Bratislava groups.

The ticket sale starts on 1 February

“We have the ticketing strategy ready and approved. The systems are set to individual levels - for tickets for individual duels, day tickets and ticket packages. The first to come is the launched ticket sale from the 1st February of the packages for all matches of the basic groups D, E and F to all matches of the basic phase - 6 matches in each group, and thus a total of 3 packages,” Igor Nemeček currently informed. This means that in less than three weeks, fans will be able to secure tickets for all matches of the Slovak team in the basic F-group in Košice. In Bratislava, there are certain duels of the German national team in the D-group. "We believe that the matches of the Czech national team will be very attractive in the E-group," added Igor Nemeček.

The European Championships 2022 will be played in five cities - in three Hungarian ones (Budapest, Debrecen and Szeged) and two Slovak ones (Bratislava, Košice). Cooperation with the host cities is also necessary for a successful organisation. "We have a very good cooperation with both in Slovakia. We actively communicate with the mayor of Košice and the mayor of Bratislava in which areas they will be our rightful partners in the organisation of the championship. We have well-established communication and cooperation in both cities," praises Igor Nemeček.

The Slovak team had to change the original plans

Successful performance at the domestic European Championships is the goal of the national team of Slovakia. The coronavirus again intervened in the preparation of the Slovak men's handball team, which planned to train continuously in three blocks in January, and several times they had to competently adjust the original plans. “We are sorry that we lost four matches. We will not face the Hungarians or Romanians twice, in the end we have two matches left against the Hungarian U21 team. But we have to look ahead; we still have enough difficult duels ahead of us. I reckon the last block from this week we will be able to complete according to the changed plans,” said the head coach of the Slovak Republic Peter Kukučka, who believes that he will use the remaining twelve months until the European Championships for quality and full-fledged training.