’We, the fans are not going to calm down’ – Men’s EHF European Handball Championship 2022 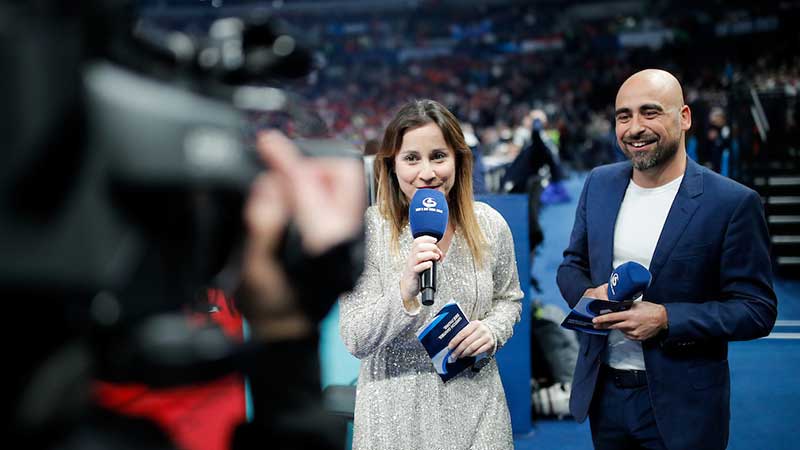 ’We, the fans are not going to calm down’

The Master of Ceremony of the Men’s EHF EURO 2022, András Petur is deservedly one of the most famous and honored speakers in Hungary. He can be familiar for us from the previous Watch Games. See More programmess. And now he let us take a look behind the scenes of the sport events, and told us his opinion about the effekt of athmosphere made by the Hungarian fans.

You commentate, lead show, boost the audience’s mood on the greatest sport events. Do you have time to spend with family?

We just made the notes in the family calendar we have hang on the fridge, it tells that I will be at the TV studio or at the handball arena every night in January. We don’t host international events every week of course, so I have time periods to be with them. And somehow, – like today – finally I can manage to have time for fun at the playground with my kids.

That is well known that you like and follow handball. What is the difference to other sports?

Handball is a super fast game. More or less 60 goals happen in 60 minutes. Plus there are fouls, yellow and red cards, time outs and some other things out of the report. So we need to raise the microphone at least 100 times in one match. Two goals in 3 seconds are quite rare in other sports, not like in handball. So you need to think of time when you look down to you sheets, ’cause missing an important action can not happen. The audience is watching and judging you every time.

Is playing at home an advantage or disadvantage? Or shall I ask what did you observe from the pressure on the Hungarian players’ shoulder placed by the fans?

Timo Werner, the player of the RB Leipzig was dizzy and had kinda’ physical sickness in an away Champions League match against Besiktas because the turkish fans were so loud. He had to be substituted, and a situation like his is excusable of course. It proves the nuanced possibility of fan’s negative effekt on sportsmen. And of course not everyone can show his best under high pressure, but everyone have to understand that fans cannot ’overlove’ a team. Fortunately some players said that the audience’s support was fantastic. They were singing from the first minute till the last in the brand new arena of handball in Budapest. Defacto there can’t be more ideal circumstances. I am sorry if it cramps anyone, but I, as a speaker, rather we, the fans are not going to calm down.

For sure you have a story that touched your soul.

It was 17th July 2017. Hungary hosted the 17th FINA WORLD CHAMPIONSHIPS and this date is the birthday of Tamás Märcz olympic champion who is the head coach of the Hungarian waterpolo team. Tamás gave the last instructions to the players before the game. I got a candle from somewhere, put it’s picture to all the giant screens in the arena and made ten thousand sport lover souls sing ’Happy Birthday’. After a while the players told to Tamás ’It must be for you’. Then he looked up in amazement and tears sprang to his eyes. Maybe it is not a big thing but I am so proud to be part of this moving moment.

How do you prepare yourself before you take the floor?

The only thing you can be prepared for on an event like Men’s EHF EURO 2022 is the proper pronunciation of the names. We don’t want to become Dutch or Portuguese but we give respect to our opponents by pronuncing their names in the way they do. For this I visited the Dutch, the Portuguese and the Icelandic teams and asked them among other things which first name they use if they have more. This is basic, and all the rest comes by itself.